Reservations and use of installations  +

Continuing with the commitment, acquired by the UMH, to ensure equal opportunities for our students, and clearly betting on the inclusion of people with functional diversity, the Office of Sports has been integrating in its competition activities Inclusive Sport.

During the 2015-2016 academic year, the UMH participated for the first time in GOALBALL’s CADU (up to now promotion sport), obtaining the SILVER medal. Goalball is the only Paralympic sport created specifically for people with blindness and visual deficiencies, in which two teams of three players each participate, all with a totally opaque mask. In these days, people with and without visual disabilities have had the opportunity to compete together representing their university, competing with teams from the Universities of Valencia and Alicante. This sport requires auditory sense to detect the trajectory of the ball in play (which carries rattles inside) and also requires a great capacity to know to be located at any moment in the most appropriate place, in order to launch the Ball and enter it in the goal of the rival team by means of a throw by the hand, and intercepting at the same time the launches of the opposite team. During the game, 20 minutes long, each team is placed on one side of a track 18 meters long, in front of a goal 9 meters wide. Any of the three team members tries to keep the ball from entering the goal, winning the team that scores the most goals in the opposite goal.

Also during the 2015-2016 academic year, the UMH included in its swimming team, for the first time, both in CADU and in CEU, a member with functional diversity, Manuel Martínez Martínez, who at the University Spanish Championship (CEU) obtained excellent results : GOLD in 50 Braza, BRONZE in 100 Back and SILVER in 50 Back. 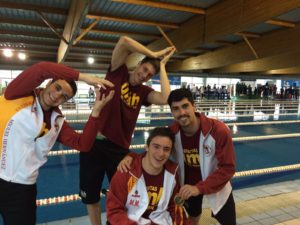 In the same sense, also the course passed for the first time, the UMH has participated in CADU GOALBALL, (so far promotion sport), getting the SILVER medal.

This course, 2016-2017, in addition to maintaining the participation of these sports in university competitions, the Sports Office has included Goalball in the internal competitions of the Trophy Rector, thus giving greater visibility to this new sport.

If you want to compete with the UMU in CADU or CEU in Inclusive Sport, consult all the information and register in our address https://deportes.umh.es/competiciones/

If you want to participate in the Rector Trophy in Goalball, register in this link https://deportes.umh.es/competiciones/trofeo-rector-2/

On the other hand, during the course of the Summer School and the Classroom Junior, managed by the Sports Office, in July 2016, have been organized games for children using wheelchairs, balls with sound, bandanas difficult for the vision, among other capacities, thus creating situations in which they have been able to experience the game and the sport from the perspective of the people with functional diversity.

You can find much more information in ATED (Area of Attention to the Student with Disability, dependent of the Vicerrectorado of Studies and Sports) whose objective is to guarantee the access to an educative university educations: https://atenciondiscapacidad.umh.es/

And in the Delegation of Students in https://delegacion.umh.es/